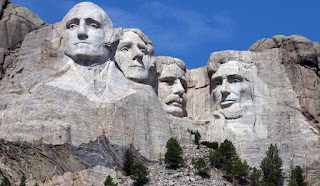 The first four presidents of the United States - Washington, Adams, Jefferson, Madison - were philosophical people.  They loved, cherished, and pursued (and may even have attained to some extent) wisdom.  (The American Philosophical Society [APS] of which they were members was co-founded by Ben Franklin; let's call the aforementioned the Big Five of the American Founding.)  It's not a stretch to say that had America's founding generation not been of the intellectual and moral caliber that they were - had they not been the sort of people who would found or become members of a philosophical society - America probably wouldn't be the great nation it has been.

Unfortunately, their legacy has been squandered, to the point that we have the shitshow of today.  Having an uncouth, unread man as president - elected mainly on the promise of taking on the (intellectually bankrupt and therefore) corrupt swamp that is D.C. - is but a symptom of the problem (that swamp being the bigger one).

Trump tweets out this demonstrably ignorant troll-post earlier today.  The Democrats, who've cried racism umpteen times before, are reeled in yet again; they just can't help themselves and perhaps Trump knows this is how they would react.  (It's so predictable at this point.  Call a shithole country a shithole country, and that's immediately, automatically, incontrovertibly racist and you'd better go along with that instant determination, you deplorable white-supremacy enabler, you.)  This, right after the Dems had an intra-party, short-attention-span news-cycle rift when AOC pulled the race card on the race-card-pulling Nancy Peloser; obviously, they refuse to learn a fucking thing.

This is a shitshow stuff, not a rational and intelligent conversation.

So to get down to the essential/fundamental issue here:

Trump doesn't need to be a Marcus Aurelius to govern wisely.  Aurelius is so unique a historical figure as to be well-known (among those with a clue, i.e., not shitshow-participants...) as both a statesman and a philosopher.  His Meditations are considered to be important and significant contributions to the Western philosophical canon, an accomplishment not known among any other statesman I can think of.  The likes of Jefferson (who served as president of the United States at the same time he served as president of the APS) were indeed philosopher-statesmen, just not known to be significant contributors to the philosophical canon.  The natural-rights doctrine Jefferson was drawing on for the Declaration of Independence originates with John Locke, a top-10-ish Western-canon philosopher.

Nor, given the specializations involved, should we expect a statesman to be a significant contributor to the philosophical canon.  But we have good reason to expect that a statesman should be wise and wisdom-loving.  Whatever his strengths, Trump doesn't show himself to be this, not in any consistent or integrated sense.  Instead of troll-tweeting at 4 a.m., how about he spend 10-15 minutes actually reading from the Meditations and learn a thing or two about wise governance and living.  He says time and time again he knows more about X than the years-long experts in X know - an implausible claim on its face given the necessary time invested for specialized expertise.  It's demonstrably implausible when he says and tweets out things that neither a Jefferson nor a Marcus Aurelius would say/tweet.  (Checkmate, Trump?)

The linked leads are all over this blog for how America (and the rest of the world for that matter) can be transformed to unprecedented greatness via philosophical education, beginning at a young age.  I'm tired of linking them every post.  Look in the subject tags/labels below for more direct leads.  We can make American presidents great again, but it requires making the American citizenry more wise and/or wisdom-loving.

===
On a completely unrelated topic (heh heh), I watched The Revenant last night, having seen it the first time in its theatrical release a few years back.  On a high-def screen it is visually downright amazing (I remember it looking pretty good on the big screen, but not as crisp as on HD); unsurprisingly it received the Academy Award for best cinematography.  As meaning-of-life filmmaking goes, it's tops.  (I've placed it in the top 10 in my list of favorite films, where meaning-of-life significance is the primary ranking criterion.)  Not just the lead character but a great many of the others had it pretty tough by today's standards.  No cell phones, no google, no transportation system, no amenities we take for granted now.  What a bunch of whining, crybaby/crybully pussies the Dems especially and those they coddle are, huh?  Try getting mauled by a bear and left for dead in the wilderness before coming back and crying institutional racism, and then I might give a fuck how all sense of historical and personal perspective might still manage to be lost.  For me to give a fuck you'd have to do philosophical learning and still manage to come away clueless about how to manage life's unfairness with wisdom, because my give-a-fuck antennae would somehow have missed something big.  Just keep it up, Dems.  With the possible exception of Mayor Pete (and he's still a Democrat?), Trump is still less worse than these hubris-filled, wisdom-avoiding, loathsome leftist losers.  Maybe if the country got around to getting the philosophical education it needs (ffs already) its people would have much fewer problems, much less problems they'd be running to the coercive state to try to solve.  (As The Revenant makes clear, it's not just intellectual perfection a la Aristotle that matters, but also a will to power for which I am sure Nietzsche has plenty to say and display.  Rand may have synthesized these two human-life-components to a considerable extent; ya think?  But with Aristotle and Rand I say that the intellectual-perfection part is the more hierarchically fundamental/explanatory to what makes a choiceworthy life overall; we have to use our intellects to learn about will-to-power as a principle to perfect upon as appropriate to our human/rational constitution.  Shorter run, as portrayed in The Revenant, will-to-power may predominate....)  Ideally, a head of state is at least as wisdom-loving as a Jefferson and, even better, has the capacity to write something like the Medidations from scratch; as historical precedent shows, specialization doesn't preclude it.  (Could a full-time statesman compose the Nicomachean Ethics from scratch?  The Metaphysics?  What exactly is the frontier of possibilities here, hmmm?  One thing's for sure, a much smaller and therefore much less bullshit-oriented public-governance apparatus would leave the statesperson with that much extra time at the margins for art, spirituality and philosophy.)

[Addendum: Lest the race-baiting left/Dem nitwits imply that Making Presidents Great Again means "going back to the days when presidents owned slaves" - and that we'd better share that interpretation lightning quick, or else - they should be reminded, as if they really needed the reminding, that the Presidents and the flag are off-limits from their attempts to remove their presence from American life, whether chipping away at the margins with (e.g.) the Betsy Ross flag or otherwise.  That means Mt. Rushmore stays up with the slaveowners intact.  The left/Dem nitwits, when presented with Aristotle's body of writings, would obsess over his defense of slavery and views about the inferiority of women, and scheme ways to inject their faux-outrage into the conversation whenever possible, and divert the conversation from what's top priority.  Grow the fuck up, Dems/leftists; Trump won in good part because you're loathsome losers who refuse to learn.]

[Addendum #2: Let's grant that Trump's critics are on to something - there's a grain of truth there somewhere - that when Trump tweets that the angry radical quartet of "progressive" Dems, who are also women of color, that they should "go back to where they came from," there's something ugly akin to racism going on here.  [There was something very much like racism, if not downright racist in fact whether intended or not, in his tweet to the effect that a judge of Mexican heritage might be biased against him because of his (Trump's) statements about Mexico and immigration.  For this he was called out by fellow Republicans as having gone too far.]  Dems seem to "recognize" this right away, while Trump's supporters insist there's no dog whistling going on here.  If Trump is dog whistling, he's either not very effective at it - since Trump supporters don't seem to pick up on it - or the dog whistling is all occurring at some kind of subconscious level on both his and his supporters' part.  This latter part is actually a good possibility and should be given some good and careful thought (something that neither side is really equipped for; have you seen the shitshow?).  There is something real to the "woke" claims that structural racism still exists and operates by and large subconsciously.  [I just don't buy into all the whining or the idea that racism is still so embedded that it keeps POC down.  What "keeps POC down" is a combination of factors, not the least of which is left/Dem shitting all over personal responsibility, and shitting on going out and achieving anyway despite the obstacles to be overcome.  Watch and learn from Hidden Figures ffs, and stop being a bunch of fucking whiny blame-shifting coddled pussies.  And start actually listening to black conservatives like Sowell for once.  Want to get into a selective university on a level field of play, disadvantaged minorities?  Then improve your performance and remove all doubt rather than seeking handouts and shackles on others including the highest-performing nonwhite minorities.   Learn some bourgeois values and stop recklessly smearing advocates of bourgeois values as white supremacists while altogether failing to address the argument for bourgeois values, you FUCKING MORE-SCHOOLED-THAN-EDUCATED IVY LEAGUE IDIOTS!]  If it's a racist tweet, it's not exactly obvious how it is so if so much racism these days operates at a subconscious level - and perhaps Trump is exploiting the ambiguities here to get Dems to cry racism again, shove foot in mouth, etc.  But clearly it's triggering to say to people of color to "go back where they came from," and Trump is doing this unaccountably while the opposition cries racism unaccountably.  Can the dialogue be improved, somehow?  Anyway, with tweets like this one Trump is being an anti-constructive dickhead who doesn't possess either the knowledge or temperament or wisdom to heal divisions as opposed to fomenting them further, such fomenting seemingly to no other end than to get the Dems to make asses of themselves, which has the short-run effect of helping his re-election bid but the longer-term effect of making the national conversation more of a shitshow.  Next post: I address the controversy around athletes disrespecting the flag - which is what they're doing - and Trump's stupid, further-division-fomenting, anti-constructive response to those athletes.  What would a Rushmore president do?]

[Addendum #3: Gutfeld wipes the floor with the Democrats with one question: How many racists say to go back to where you came from, fix things there, then come back?  (Not that this excuses Trump's terrible messaging about . . . patriotism, I guess?  But god, the Democrats are pathetic.  One thing Trump has done with this is to draw more attention and scrutiny to the absolutely toxic - Jesse Watters calls them radioactive - "Squad."  The intellectually reckless leftism that created the "Squad" is on the Dems & their ilk.)  (A facebook comment pushing back on Gutfeld's point, which seems reasonable but somehow still strikes me as contentious especially in this context, a 'somehow' which I'll put my finger on in due time: "The racist part is insinuating American citizens aren't American by birth based on the only trait they all share, skin color.")]

Ultimate Philosopher
I am author of Prologue to an Aristotelian End of History (2015) (free pdf), and am currently writing a more comprehensive treatise ('Better Living Through Philosophy') further developing my philosophy of Perfectivism, in the tradition and spirit of Socrates, Aristotle, Aquinas, Ayn Rand, Maslow, Kubrick, Howard Stern, and other geniuses.
('a Chris R. Cathcart project')

I can be contacted at gmail with theultimatephilosopher as prefix.